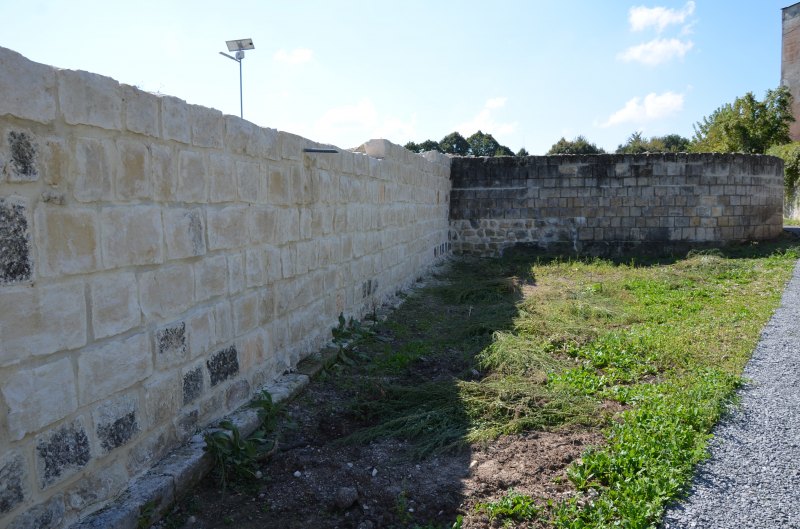 The western fortress wall had a straight line with the total length of 339 m and thickness of 2.40. Eleven defensive towers protrude from the front. The two angular towers (southwestern and northwestern) were fan-shaped, the remaining 9 – U-shaped. Their external size was: length 9.30 – 9.65 m and width 8.35 – 8.60 m, internal size: length 7 m and width 4.75 m, the tower walls were 2.00 – 2.05 m thick. The average distance between the towers was 30 m. The entrances to the towers were 1.50 – 1.65 m wide. The fortress wall was 12 m tall (together with the crenels) and the towers were about 15 m tall. The western fortress gate was shifted slightly to the south of the center of the fortress wall: there were 5 towers to the north of it and 4 towers to the south of it. The gate had the following size: length along the direction of movement (east-west) 10.75 m and width (north – west) 10.40 m. It was flanked to the north and to the south by U-shaped towers. The design was identical to the one of the northern and the eastern gates of the fortress. It had two doors: an external descending door and an inner two-leaved door with opening width of 4.30 m. There was a rectangular room between the two doors (propugnaculum) which was 6.85 m long (east – west) and 6.20 m wide (north – south). It was overarched with brick masonry. In front the propugnaculum there was a rectangular room that opened to the east. The flooring of the passage through the western gate was made of massive stone tiles with ruts hewn in them for wheels of carts and chariots to pass.

An archeological study identified two stages of adjustments of the western gate. Foundations of a stone staircase with step width of 4.70 at the bottom and 1.86 at the top were found at the southeastern end of the gate.

During the construction works in Abritus that took place during the reign of Justinian I (527 – 565) three of its four gates were blocked up: southern, eastern and northern, only the western gate remained operational.