The eastern fortress wall of Abritus had the shape of a broken line with the total length of 358.90 m. Due to the steepness of the slope along the river bed of Beli Lom – natural defense against invasions – it was significantly less thick than the other fortress walls – 2.10 m. For the same reason the eastern fortress wall was placed at the northeastern angle of the fortress to south of the northeastern angular tower: this was the only place where the terrain allowed comfortable access to the interior of the fortified area. The technique used in construction of the wall was analogous to the one used with the other walls: the two faces were made of comparatively rectangular limestone quadrae soldered with white mortar containing admixtures of crushed brick and tiles, while the wall was filled with stone rubble with large amounts of white mortar (opus implectum) poured over it. Except for the farthest northern part of the wall, the rest of its stretch – the ridge of the rocky slope – had no foundations and was instead erected directly above the rocky terrain which had been preliminarily leveled and cut. Six defensive towers were constructed along the front of the wall, standing at different distances from each other depending on the features of the terrain. The tower to the south of the eastern gate was a V-shaped one (a variation of the U-shaped towers), while the remaining 5 had rectangular shape and entirely protruded from the front of the wall – at 3.50 to 7.10 m of the face of the wall or partially protruding in and out of the wall. 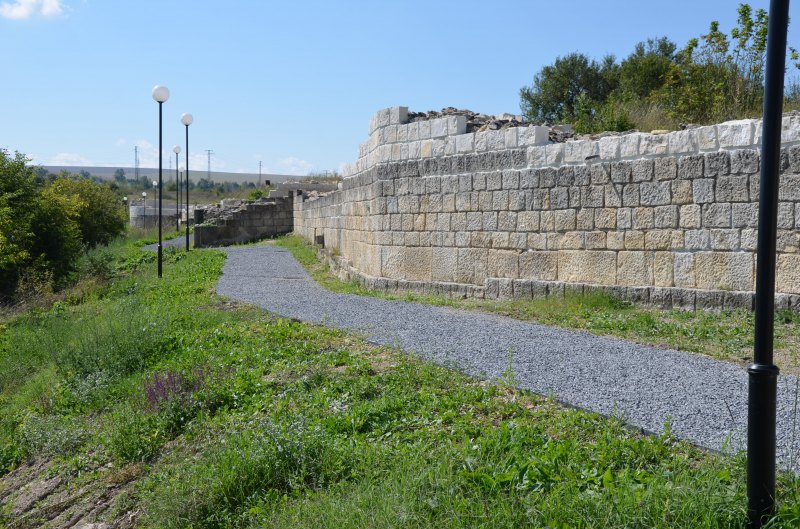 The special features in constructing the eastern wall, the different design of the towers, as well as the stratigraphic observations during the last few years lead to the conclusion that except for its farthest northern part, the wall was erected at later times – during the reign of Emperor Anastasius I (491 – 518) or during the reign of Emperor Justinian I (527 – 565). Unanswered remains the question of the layout of the early fortress wall, the one of the early 4th century. It is not certain that such a wall even existed. A postern with opening width of 1.80 was constructed in the wall near tower 15. A few channels for draining of rainwater were found at a few places along the stretch of the wall. The channels were made of stone and soldered with white mortar.