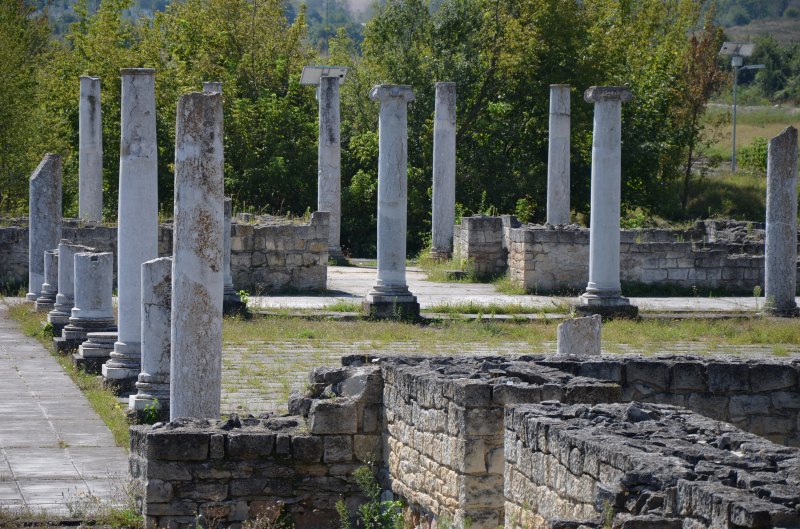 It was built and inhabited in the 6th century AD on top of the ruins of buildings erected earlier in the 4-5th century AD. The building was constructed in two stages. The southern section was built first: 6 shops situated symmetrically on both sides of a wide entrance and a Roman-Ionic colonnade running in front of them. Later on, the central section (the peristyle yard and adjacent storerooms) and the residential section were built. The finished building stood out with its enormous size: 80 m in length (north – south) and 41 m of width (east – west). Its walls were made of processed limestone blocks soldered with white mortar and were 0.65 m thick. It had two entrances: one from the east and one from the south and the total number of rooms was 25.

The central section of the building was a big open yard paved with stone slates and encircled by a Roman-Ionic colonnade. Rainwater was drained through a brick masonry channel to the northeast in a small room that functioned as a latrine (toilet). This colonnade was not erected specifically for the building but had been erected for older buildings (it dates back to the second half of the 2nd century AD). To the east and west of the yard, there were two large storerooms. The residential section is located to the north of the peristyle yard. It comprises 9 rooms located on both sides of a spacious rectangular hall that ended into a semi-circular apse to the north that probably served as a tablinium (reception hall). It was decorated in colourful frescos of floral and geometric motifs. On both sides of the hall – to the East and West – there were 8 bedrooms and service rooms and to the north – 2 storerooms. To the south the building ended with 6 shops with entrances to the street south of it and behind the shops there were 2 storerooms. The destruction of the building coincided with the destruction of Abritus in the late Antiquity, in 586 during the Avar invasion.

The building with the peristyle yard is the most impressive one among the Late Antiquity residential buildings of Abritus discovered so far. It has twice been subject to conservation and restoration – in 1976 – 1978 and in 2003 – 2005.