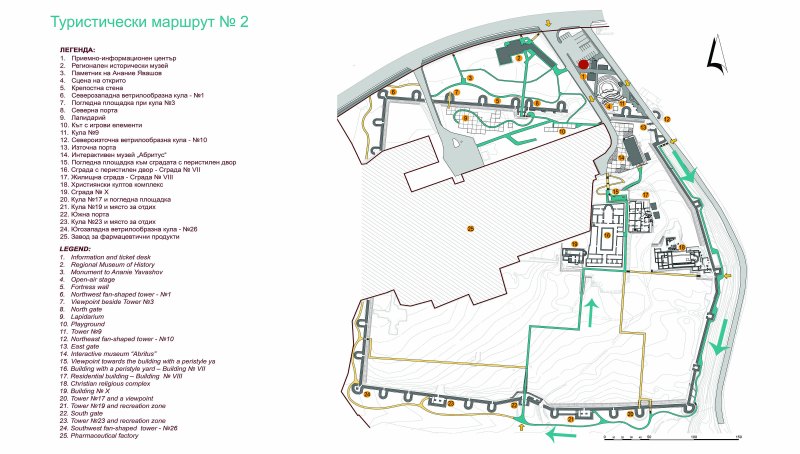 The walk around Abritus Archeological Complex near Razgrad provides an interesting opportunity for visitors to feel the atmosphere of Bulgarian, Balkan and European past in natural surroundings (on the spot) through a number of visual attractions.

The first terrain studies in the area of the so called Razgradski Hisarlak (Hisarlak of Razgrad) were carried out as early as 1887 by the local teacher, public figure and academician-to-be – Ananie Yavashov. Today, thanks to the efforts of generations of Bulgarian archeologists ancient Abritus has disclosed quite a few of its secrets.

Depending on their interests and amount of spare time curious tourists may choose among four different tour versions around the archeological complex. Part of the exhibition is accessible to people with disabilities.

A walk around the fortress wall provides a great opportunity to come into contact with the architectural look of Late Roman fortifications (castles). Visitors understand why the ancient master builders gained such fame – they knew how to interweave magic and the strength of stone into solid structures. Visitors are encouraged to listen to the silent tale of the stone wall and their imagination is captivated by visions of the fate of the defenders and attackers of the castle.

The original manner of presentation through metal structures that are part of the turrets allows for bird’s eye view of the area. Visitors can see clearly the castle, the surrounding hills and the river that plays the role of a natural moat. Thus visitors are presented with proofs that ancient architects aimed at maximum integration of their structures into the landscape in order to gain additional protection. Guests can also witness the reasonable symmetry achieved in positioning the four main fortress gates, the posterns that accompany them and the 35 defense towers of varied shape.

So far a few residential and public buildings have been discovered on the territory of the Late Antiquity city. Building VII is among the most presentable ones. Research shows that the building constitutes an assemble that stretches on 3000 square meters and stands on older buildings of the 4th and mid-5th century. The building that was constructed in the 6th century is the only one with peristyle – an inner yard with a colonnade that emerged in Ancient Greece and was later adopted by Romans. Its premises were divided into a residential and commercial area which included stores and storage places.

The few remains of the picturesque decorations in the public premises of building No. VII give out the sophisticated taste of its inhabitants who undoubtedly were always part of Abritus elite. The exquisite style of the Ionic order columns supports that conclusion and at the same time serves as evidence that from the very first centuries of its existence the city hosted stonemason’s workshops working at a very high professional level.

Building No. VIII that stands nearby has been partially investigated and at this stage it confirms the conclusions made so far. Besides, the skilful manner of presentation allows visitors to see how in the early Middle Ages new residential rooms were constructed above the remains of the ancient structure.

Building No. X that is located just 3 meters away from building No. VII adds new details to the architectural appearance of Abritus. The presence of a hypocaust (underfloor heating) prompts that initially it must have been used as a bathroom. Later it was reconstructed into an early Christian basilica which is proved by the apse erected in its eastern part.

Indeed Christianization of the empire which started in the 4th century made it necessary that new buildings were constructed or existing one were adjusted to host services. The fact that Abritus was announced an Episcopal center justifies the erection of a large Christian complex in the eastern and most elevated part of the castle. It went through a few construction stages and in the period from 5th to 6th century a lavishly decorated three-nave basilica was constructed, which was later destroyed along with the entire city during the Avar invasion in 586. Centuries later, during the reign of emperor John I Tzimiskes (10th century) the basilica was restored and became a part of a monastery complex with a scriptorium (a room devoted to copying books) and a school. Its ultimate destruction was a result of the attacks of the Pechenegs in the 11th century.

Two lapidaria have been arranged in the archeological reserve. One of them presents elements of architectural monuments from different periods of the development of Abritus. The other one displays devotional and burial monuments form the area and the surroundings of the town. Visitors have the unique opportunity to communicate with the inhabitants of the ancient settlement by seeing their faces, reading the inscriptions they composed, guessing the deities they worshipped… Here too, just like anywhere in the Empire, there was a mixture of religious beliefs and interweaving of cultural traditions, artistic and craft skills. And the beauty of shapes and exquisiteness of workmanship show the eternal pursuit of perfection of the ones who ordered the works and the masters who completed them.

Exhibits in the museum collection prove the same thing. The pottery, the artistic metalworking, the coins, as well as the other artifacts prove that in economic and artistic aspect life in Abritus was no different than life in the other cities of the Empire.

Abritus Archeological Complex has an interactive museum that provides a number of options for a visual contact with the past. A number of films trace and illustrate archeological studies. Visitors can play different historical roles and perform the activities connected with them.

The archeological excavations in Abritus will continue in the following decades. Undoubtedly, new and interesting finds are on their way.