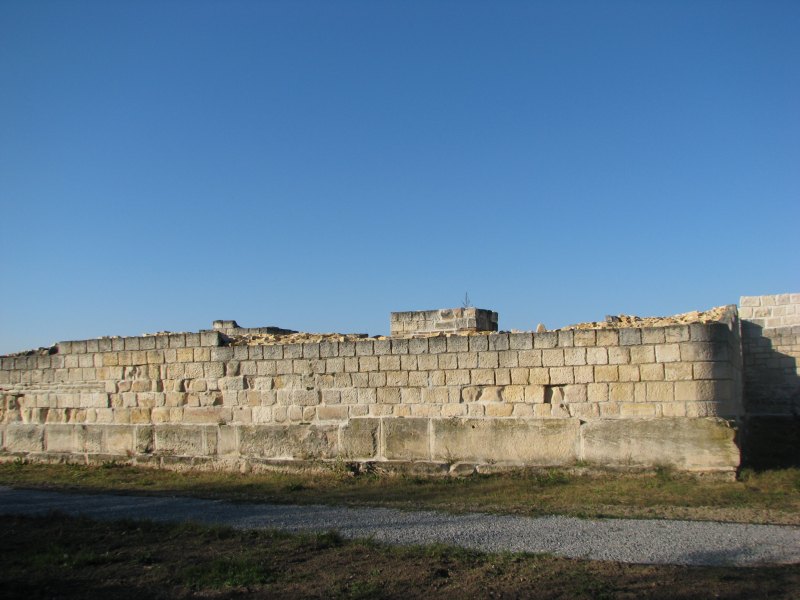 Tower 23 stood at the western part of the southern fortress wall located at 21.10 m to the west of U-shaped tower 22 and 19.40 m to the east of U-shaped tower 24. Its design and construction technique were the same as the ones of the other rectangular tower of the southern fortress wall – tower 19; the size was also almost identical: length 19 m (east – west) and width 10.45 m (north – south) (outside) and length 14 m (east – west) and width 8.05 m (north – south) (inside). The dado was made of large (up to 2.43 m long) and small limestone blocks with smooth and rusticated walls arranged in the “longitudinal – transverse” system with length from 0.52 m to 0.72 m depending on the delevelling of the terrain. There followed a 0.10 m-wide high shoulder and above it were constructed the walls of small stone blocks soldered with white mortar, the walls were filled by crushed limestone with large amount of white mortar (opus implectum) poured over it. A “patch” of brick with a total length of 2.25 was preserved at one place along the external side of the southern wall – a later repair of the original construction. While the dado was in straight angles, the walls of the tower themselves were rounded in order to gain additional stability against the hits of battering rams. Fortress walls were 2.40 m thick. The entrance to the inside of the fortress was located right in the center of the northern side and was 2 m wide. Its sides were constructed by large stone blocks with rusticated external and smooth internal faces arranged in the “longitudinal – transverse” system. Both short sides of the tower – eastern and western – held posterns with opening width of 1.40 m to the outside and 1.65 m (to the west) and 1.70 m (to the east) to the inside. The tower was repaired after a great fire and the two posterns were blocked up. Inside the tower there were two symmetrical pillars 3.55 m away from each other, only the foundations of the western one have been excavated. The eastern one was sized as follows: length 2.12 m (east – west) and width 1.55 m (north – east). It was constructed with the opus mixtum technique: a belt of three rows of stone, a belt of brick with 4 rows of brick sized 0.35 by 0.45, stone masonry of 2 rows of stone blocks and again a belt of 3 rows of brick. At the height of 2.10 m above the shoulder the pillar ended with a profiled stone cornice. Pillars served to support an upper floor (floor level of wooden beams) of the defensive tower. The materials found on the spot prove that the roof was made of wooden beams covered by tiles.