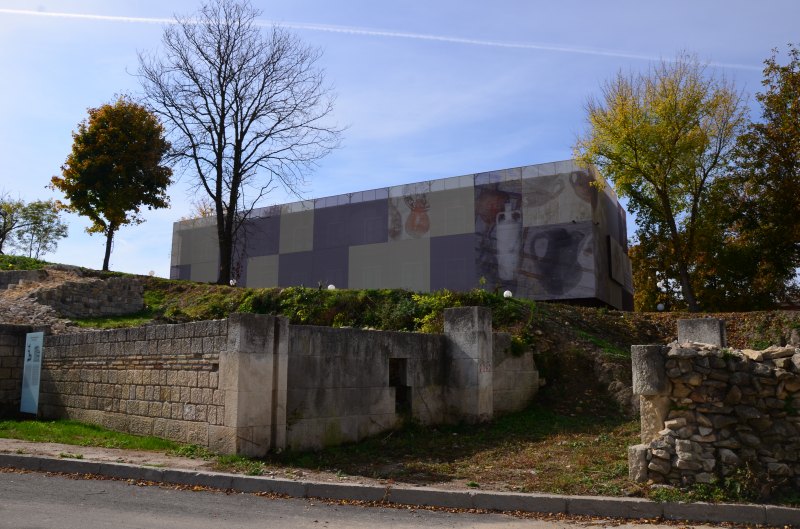 Unlike the other three fortress gates, the eastern one was located not in the middle (or close to the middle) of the eastern fortress wall, but in its farthest northern end between the northeastern angular tower and the neighboring V-shaped tower No. 11, some 4.7 m away from the northern fortress wall. The reason to choose this location was the steep rocky slope that descends to the bed of the Beli Lom river in the area south of the place chosen for the gate: this was the only place where one could assess the fortress. Only the foundations of the gate have been preserved. During the restoration process the northern and western fortress gates were used as models. It had two doors: an external descending door and an inner two-leaved wooden door. The external door had a doorstep placed on stone masonry with width of 1.15 m that was constructed on the foundation rock and was used for leveling of the terrain. To the west the internal two-winged door ended with two pilasters that were 0.70 m wide each. There was a rectangular room between the two doors – propugnaculum – that was 6.05 m long (east – west) and 4.70 m wide (north – south). The two long walls of the propugnaculum were 1.80 m wide each and they had extensions to the west which served to hold the open wings of the internal door. The wings were 2.90 m long and 1.20 m wide. The gate was 9.65 m long (east – west) and 9.05 m wide (north – south).

At the gate the eastern fortress wall was thicker – 2.55 m, while its southern part was 2.10 m wide. A street covered with gravel started from the eastern fortress gate and lead to the interior of the city to the west. The layout of this street in the inside of the castle has not been studied. In the shoulder of the neighboring tower 11 at the height of 0.80 m was discovered a later repair that was 2 m long and was made of 3 lines of brick sized 0.33 by 0.33 by 0.045 with gaps of 4 -5 cm between them. In mid-6th century the eastern fortress gate was blocked up just like the northern and the southern gates.