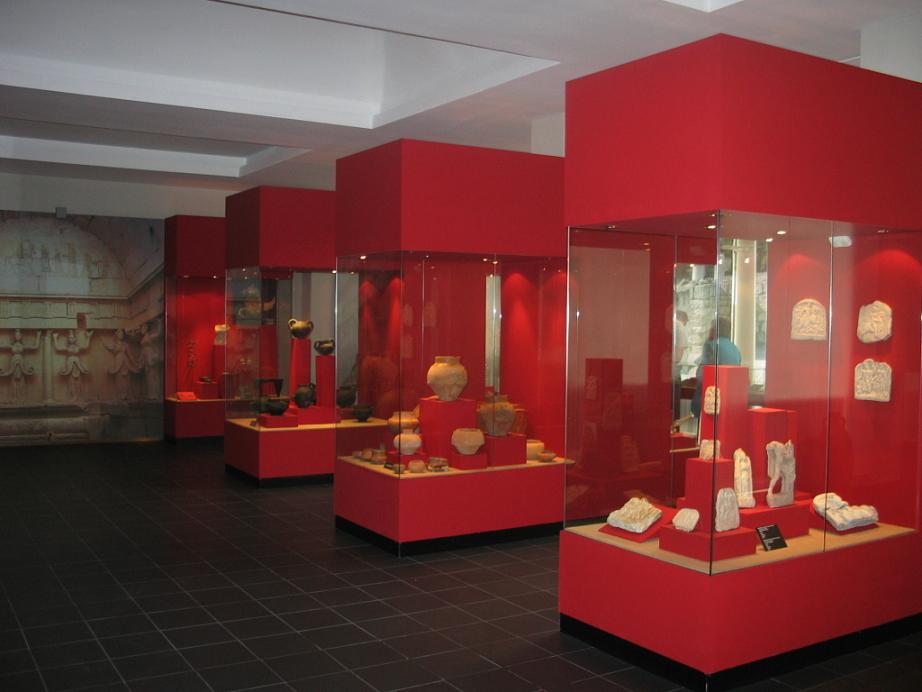 The archaeological exhibition is arranged by themes and follows chronological sequence. It includes movable monuments, which date back to the earliest documented era in the Ludogorie – the Late Paleolithic – until the end of the Second Bulgarian Kingdom. Five major themes correspond to the main stages in human society’s development. Each of these themes consists of several subthemes, which represent the different stages of the corresponding period.

Flint artifacts are displayed, which were found not far from Razgrad, in the “Chukata” Area. They belong to the times of the Old Stone Age (Paleolithic), dating from 18,000-15,000 BC. These are the earliest traces found, testifying for the humans presence in Razgrad area. During this period, human society led a nomadic lifestyle, surviving on hunting, fishing and gathering. The findings showed the location of the prehistoric hunters’ temporary camps.

The findings on display are discovered as a result of the archaeological excavations at the Hisarlashka settlement mound near Razgrad and the settlement mound and necropolis near the village of Radingrad. The ancient societies reached their prime during the late Copper Age (4,500-4,000 BC). The settlements in the Ludogorie are numerous throughout this period. The flint tools in other regions were the source of yield, craftsmanship and export. The first metal (copper) tools came about. The discoveries from our region are beautifully shaped pottery, exquisite cult sculptures and personal ornaments, made of the Mediterranean shell “spondylus”. They are an expression of an advanced civilization, which maintained communication with remote areas.

The culture of the Thracians, early days. Bronze metallurgy (the 28th-12th centuries BC)

In the beginning of the third millennium BC, the tribes who inhabited the steppes of the Northern Black Sea shores, moved to the south and populated today’s Bulgarian lands. With them came a new culture in using materials – in addition to stone for making their tools and weapons, they also used bronze. Beneficial for their military and everyday life were the horse and the carriage. The Bronze metallurgy flourished in the Late Bronze Age (the 15th-12th centuries BC). Numerous single, as well as collective findings of bronze tools and weaponry were discovered from this period. The stone molds, used for their casting, are an evidence of their local workmanship. The largest archaeological discovery on the Balkan Peninsula came from the village of Pobit Kamak. The ancient writers mentioned the population from this period for the first time by the name of “Thracians”.

During the 13th and 12th centuries BC, in the lands of Central and Southwest Asia, the technology of iron production was adopted. The movement of the tribes from this region extended to the Balkan lands. A new culture was being born, which prime was during the period of the 5th-3rd centuries BC. The lands of present-day Northeastern Bulgaria were inhabited by the tribes of the Thracian Goths. One of their biggest political, religious and worship centers was situated in the villages of Sveshtari and Malak Porovets. The Thracian fortress of Helis, where the residence of the local ruler was at, is the central point of this complex. The famous royal tomb was discovered in one of the mound necropolises, surrounding the fortress.

The Thracian lands were conquered by Rome in the beginning of the 1st century AD. Today’s Bulgarian lands comprised of the provinces of Upper Moesia (Moesia Superior), Lower Moesia (Moesia Inferior) and Thrace. The newly founded city of Abritus, having developed substantial material and non-material culture, was a military-strategic, political and economic factor at the eastern part of Lower Moesia Province. The city’s early bloom ended in 251, when the province was wrecked by the invasion of the Goths. That is when, in the battle near the city of Abritus, the Roman army was defeated and Emperor Trajan Decius was killed. The city was re-established in the beginning of the 4th century AD, when Emperor Constantine I (Constantine the Great) built a solid fortification system and numerous administrative and residential buildings. In the 5th and the 6th centuries AD, the city was the center of conversion to the new Christian faith and the seat of a Bishop. Throughout this period Abritus was demolished several times by the “barbarian” invasions, but recovered again. It was finally destroyed by the Avars in 586 AD.

The Bulgarian State (the 7th-14th Century)

After the establishment of the Bulgarian state on the Lower Danube, during the 9th and the 10th centuries AD, the lands of the Ludogorie were densely populated. Aside from unfortified settlements, fortresses were being built along the important and strategic places. At the end of the 10th – beginning of the 11th century AD, the Bulgarian lands were conquered by Byzantium. After the re-establishment of the Bulgarian state at the end of the 12th century AD, life in the settlements here was partly restored. During the 14th-15th centuries AD, the settlements, fortresses and rock monasteries were located mainly along the Beli Lom River. The Ludogorie lands were conquered by the Ottoman Turks in 1388.

The History Museum in Razgrad has a large numismatic collection. The currency throughout the early Hellenistic period (the 4th – 3rd centuries BC) in the Ludogorie lands included the gold (staters), silver (tetradrachms and drachmas) and bronze editions of the Macedonian kings Philip II, Alexander III, Philip III and Lysimachus. The Macedonian silver emissions were widely popular, which was why they were imitated by the Goths during the second and the third centuries BC. Throughout this period began the expansion of silver coins in the region – denarius of the Roman Republic.

With the establishment of Roman rule here, the circulation flow consisted of gold (the aureus), silver (the denarius and the antoninianus) and bronze (the asses, the dupondius and the sestereces) editions. In the second half of the second and the first half of the third centuries AD, an active autonomous bronze coinage was also carried out by a number of local governments – Marcianopolis, Nikopolis ad Istrum, Odesos and others. The currency during the 4th-6th centuries AD included gold coins – the solidus, the semis and tremissis – and bronze ones – the follis coins. The numerous “barbaric” attacks throughout the period, between the 4th and 6th centuries AD, explain why many coin treasures were hidden in the ground. The largest hoard of gold coins ever found in Bulgaria was discovered in Abritus, dating from the 5th century AD and consisting of 835 solidi.

During the Fist Bulgarian Kingdom (the end of the 7th – the beginning of the 11th centuries), a subsistence agriculture was practiced and the sporadic need for money was being met by the coins, coming from Byzantium. In the 13th and the 14th centuries the currency consisted of the coins of the Bulgarian tsars Mitso Asen, Konstantin Tih, Theodore Svetoslav, Michael III Shishman Asen, Ivan Alexander and Ivan Shishman.

Where to visitAbritus Archaeological Museum - Razgrad, 70 "Aprilsko Vastanie" Bul.Share
This site uses cookies because they are important for its operation and to make your stay more rewarding. You can continue to use our site without changing your settings or change your cookie settings at any time.
Accept
Read more
Cookie settings
Cookie Box Settings
Cookie Box Settings