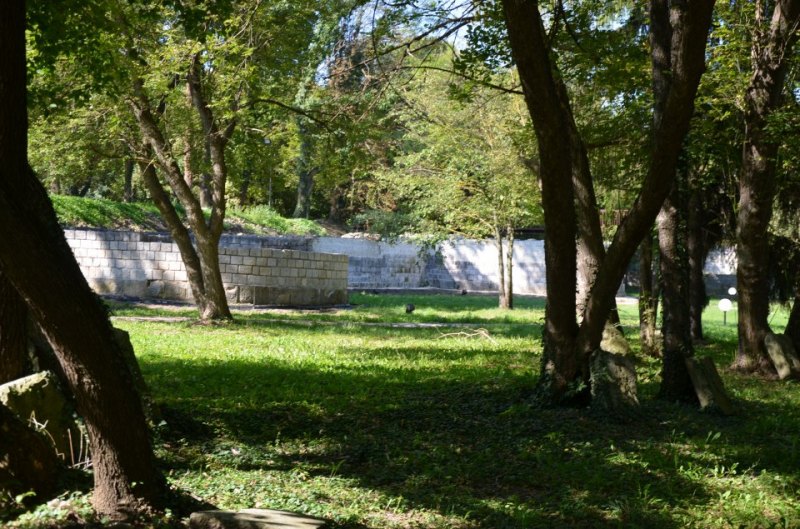 The structure of the northern fortress wall was similar to the one of the western and southern walls, as they were built simultaneously in the 330s – 340s during the reign of Emperor Constantine the Great (306 – 337) and his sons. The foundation of the wall was embedded by 1.50 m in a sturdy yellow clay soil (loess) and was constructed of horizontally arranged stone rubble with large amount of mortar poured over.

The superstructure of the wall started with a dado constructed by massive stone blocks that were 0.55 – 0.60 m high. They were arranged in one line and in two lines with the angular towers and at the U-shaped towers that flanked the northern gate. At places some architectural details and tombstones were re-used while leveling the terrain of the inside. Above the dado, the superstructure of the fortress wall was constructed with the opus implectum technique: the two faces (internal and external) were made of well-hewn stone cubes measuring 0.30 to 0.20 m on the average, soldered with white masonry and the inside of the wall was filled with stone rubble also soldered with white masonry. The wall was 10 m high – the level of the battle pathway on top of it, but the battlements on the outer side of the battle pathway were 12 m high. The battle towers were 15 m high.

On the inside of the northern wall, there was initially a path (via sagularis or intervallum) which provided access to the wall, gates, towers and staircases for the defenders of the fortress. Later on, mainly in the 6th century, residential and military buildings were erected in this street and it lost its functions.